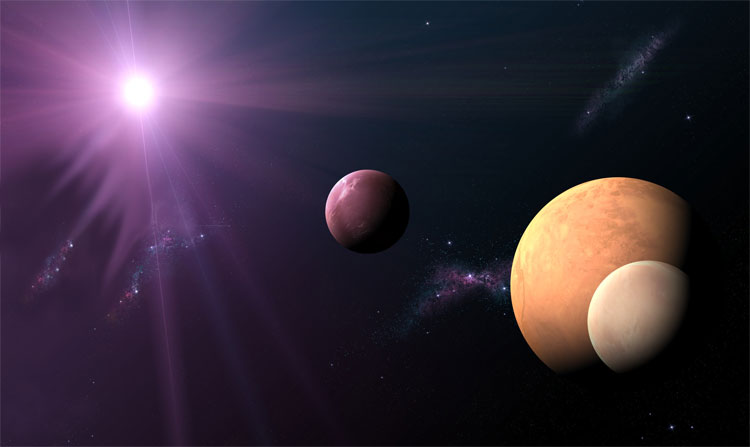 “The Earth just scrapes the inner edge of the solar system’s habitable zone, the area in which temperatures allow Earth-like planets to have liquid surface water”, says Heller. “So from this perspective, Earth is only marginally habitable. That led us to ask: could there be more hospitable environments for life on terrestrial planets?” Heller and co-author John Armstrong of Weber State University describe superhabitable planets in a paper published in the journal Astrobiology. In it, they outline some of the characteristics such planets might have. They include many, shallower bodies of water (rather than a few large oceans), a more reliable global “thermostat” that impedes ice ages, and a magnetic shield, to protect the planet from cosmic radiation.

Heller says the theory means astronomers should be aiming their telescopes at planets that have so far not garnered much attention in the search for extraterrestrial life.

“We propose a shift in focus”, he says. “We want to prioritize future searches for inhabited planets. We’re saying ‘Don’t just focus on the most Earth-like planets if you really want to find life.’” But is the discussion about which planets to look at even worth having? How likely are we ever to find life on another planet? “Statistically speaking, I would say it’s very unlikely that there is nothing out there”, says Heller. “For the first time in history, we have the ability, both technical and intellectual, to find and classify potentially inhabited planets. It’s just a matter of how we spend our observation time”. Heller expects the paper to serve as a launching point for a debate about superhabitability. He says it may take some time for the scientific community to come around to the theory. “When you follow a certain pattern for decades, it can be hard to change your mind”.

NASA’s Kepler mission has discovered a new planetary system that is home to five small planets around a slightly smaller star than our Sun (post). Two of them are super-Earth planets, most likely made of rock or ice mixed with rock, which are located in the habitable zone of their host star. This discovery is providing a target for the SETI search, since if life has thrived on these worlds and reached a point where civilization has developed complex technology, it may be detectable.

When the NASA Kepler mission was launched on March 9, 2007, the Delta II rocket was carrying the hope of a large community of scientists who dedicate their work to studying extra-solar planets, planets in orbit around other stars. The Kepler mission’s main scientific objective is exploration of the structure and diversity of planetary systems. It accomplishes this goal by staring almost constantly at a large field composed of about 150,000 stars to detect small dips in brightness due to the transits of a planet. Kepler has already been a successful NASA mission with the discovery of 2,740 planet candidates with estimated sizes from Mercury to larger than Jupiter. A fifth of these planet candidates are also called “super-Earths”, a new class of planets, without analog in our solar system, with a radius between 1.25 to 2 times the radius of our planet. The Kepler team has announced the discovery of a multiple planet system, composed of 5 Earth-sized and super-Earth planets orbiting a K-type star. The detection of these planets was indirect since Kepler astronomers observed the attenuation of the host star’s brightness due to the passage of a planet in the line of sight, and not the planets themselves. The authenticity of this multiple planet system was confirmed by a statistical analysis based on previous detections of multiple planets by Kepler. “By estimating the rate of false-positives due the remote possibility of additional planet-hosting stars in the photometric aperture we have strong confidence that we have discovered two genuine transiting super-Earth planets in the habitable zone  of their host star.  Such calculations are only possible because of the thousands of additional transiting extrasolar planets that Kepler has discovered” said Jason Rowe, Research Scientist at the Carl Sagan Center of the SETI Institute and co-author of the work. The outermost planet, named Kepler-62f (radius about 1.4 times Earth’s radius and a period of 267 Earth days) is located in the habitable zone of the star, a region around the star where a rocky planet with an atmosphere similar to Earth could host liquid water on its surface. The team expanded the definition of the habitable zone by taking into account the evolution of the brightness of the host star. Their calculations suggest that Kepler-62e (radius about 1.6 times Earth’s radius and a period of 122 Earth days) was also in the habitable zone so that liquid water could have existed on its surface, too. Similar to Venus and Mars that are believed to have lost their surface water 1 billion years and 3.8 billion years ago respectively, before our sun was more luminous, the host star’s habitable zone was broader in the past. The Kepler team’s calculations suggest that Kepler-62e (radius about 1.6 times Earth’s radius and a period of 122 Earth days) is also in the habitable zone so that liquid water could exist on its surface, too. “These discoveries move us farther down the road to discovering planets similar to Earth. While we don’t know if Kepler-62e and f are rocky or whether they have liquid water pooling on their surfaces, their existence shows that the incidence of small worlds in the habitable zone of sun-like stars is high. Thus we can look forward to the discovery and detailed characterization of Earth’s cousins in the years and decades to come by future missions and telescopes”, said Jon Jenkins Senior Scientist at the Carl Sagan Center of the SETI Institute and also co-author of the work. Both Goldilocks planets’ masses remain unknown since they are too small to produce detectable gravitational effects on the host star and between themselves. However, considering a lower upper limit for their mass and the age of the star, estimated to be 7 billion years, the team suggests that both planets are solid and either made of a dry rocky material, like Earth, or a large body of water surrounding a core of iron and rock (a water world). Kepler discoveries are an amazing opportunity to focus the search for technosignatures conducted at the Center for SETI Research led by Gerry Harp. Kepler provides the detection of exoworlds that could host water on their surfaces and potentially life. Unfortunately, the planets of the Kepler-62 system are too distant (850 light-years from Earth) to be fully characterized, and no direct measurement of their atmospheric composition is possible with current technologies. “Since December of 2011, the SonATA program to search for extraterrestrial intelligence with the Allen Telescope Array has been focusing on the Kepler exoplanet candidates and especially those planets expected to be within the “Habitable Zone” of their stars. Our surveys improve on previous, generally narrowband SETI by covering the radio frequency range where Earth’s atmosphere is most transparent, including many frequencies never before observed. We expect to complete a meaningful survey of these stars in less than 1 year — be sure to check back soon“, says Gerry Harp, Director of the Center for SETI Research.