The past decade has seen a significant growth in cosmological observations that have placed increasingly tighter constraints on the cosmological model and the basic parameters that describe it. While we have an excellent phenomenological model a more fundamental picture is largely missing, considering both the very earliest times where high-energy processes are relevant and in the late-time universe, where we are in the curious position of living in a universe that is 95% dark. END_OF_DOCUMENT_TOKEN_TO_BE_REPLACED

The Center for Fundamental Physics (CFP) at Zewail City of Science and Technology is organizing its first international conference on Quantum Gravity, Cosmology and String Theory (QGCS15) in Giza, Egypt from 11 to 15 January 2016.  END_OF_DOCUMENT_TOKEN_TO_BE_REPLACED

Our understanding of the early Universe has greatly increased in the past few years due to the high-quality observational data on the cosmic microwave background and large scale structure. END_OF_DOCUMENT_TOKEN_TO_BE_REPLACED

It is anticipated that the new results from the Planck satellite, based on the full mission data and including the Planck analyses in polarisation, will have been released some time before the meeting. It will therefore be timely to discuss the physics of the primordial universe, both from a theoretical and observational points of view. END_OF_DOCUMENT_TOKEN_TO_BE_REPLACED

Nuclei in the Cosmos is the foremost bi-annual conference of nuclear physicists, astrophysicists, cosmochemists, and others to survey the recent achievements in Nuclear Astrophysics.  END_OF_DOCUMENT_TOKEN_TO_BE_REPLACED 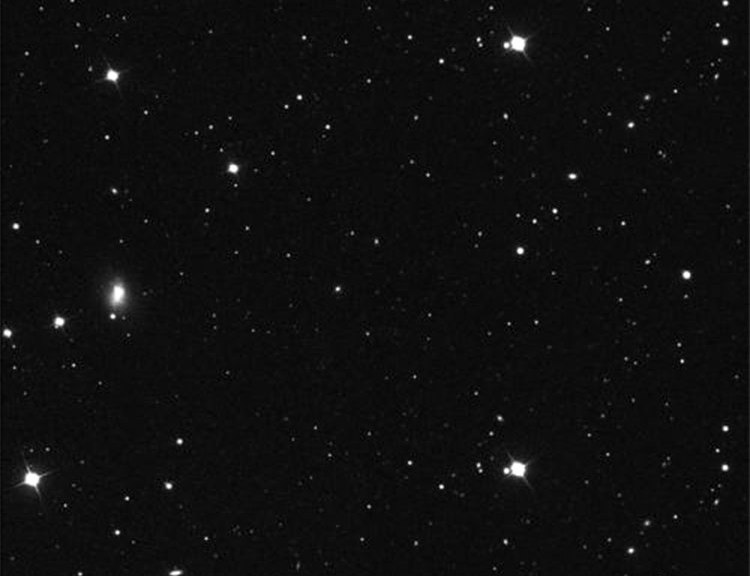 Located some 75.000 light years from us, a galaxy known as Segue 1 has some unusual properties: it is the faintest galaxy ever detected. It is very small, containing only about 1.000 stars. And it has a rare chemical composition, with vanishingly small amounts of metallic elements present.

arXiv: Segue 1: An Unevolved Fossil Galaxy from the Early Universe

After the success of the 2012 Ringberg meeting on APEX science where about 70 participants discussed exciting APEX science ranging from our Solar System to distant galaxies in the Early Universe, time is ripe to review what has been accomplished since then and to look into science opportunities for the next years. Since its inauguration in 2005, the Atacama Pathfinder Experiment (APEX) 12m submillimeter telescope has significantly contributed to a wide variety of submillimeter astronomy science areas, ranging from the discoveries of new molecules to large and deep imaging of the submillimeter sky. Among the partners the extension of APEX operations to 2017 and beyond is being prepared and new instruments are on their way and in the planning, including new wide-field bolometer cameras and new heterodyne instruments highly complementary to ALMA. While Herschel ran out of Helium, the work on its archival data benefits strongly from complementary APEX observations. SOFIA is collecting first exciting results where again lower frequency APEX studies needs to be added. With ALMA ramping up, we see already how important APEX is as a pathfinder for high angular resolution studies.

The conference venue Ringberg Castle will provide a unique setting for in depth discussions on current and future science with APEX. In particular, sessions on new scientific results, on synergies with other observatories and on APEX beyond 2015 are envisioned.

“At first, we had no idea what these things were, even whether they were supernovae or whether they were in our galaxy or a distant one”, said lead author D. Andrew Howell, a staff scientist at Las Cumbres Observatory Global Telescope Network (LCOGT) and adjunct faculty at UC Santa Barbara. “I showed the observations at a conference, and everyone was baffled. Nobody guessed they were distant supernovae because it would have made the energies mind-bogglingly large. We thought it was impossible”. One of the newly discovered supernovae, named SNLS-06D4eu, is the most distant and possibly the most luminous member of an emerging class of explosions called superluminous supernovae. These new discoveries belong to a special subclass of superluminous supernovae that have no hydrogen.

The new study finds that the supernovae are likely powered by the creation of a magnetar, an extraordinarily magnetized neutron star spinning hundreds of times per second.

Magnetars have the mass of the sun packed into a star the size of a city and have magnetic fields a hundred trillion times that of the Earth. While a handful of these superluminous supernovae have been seen since they were first announced in 2009, and the creation of a magnetar had been postulated as a possible energy source, the work of Howell and his colleagues is the first to match detailed observations to models of what such an explosion might look like. Co-author Daniel Kasen from UC Berkeley and Lawrence Berkeley National Lab created models of the supernova that explained the data as the explosion of a star only a few times the size of the sun and rich in carbon and oxygen. The star likely was initially much bigger but apparently shed its outer layers long before exploding, leaving only a smallish, naked core. “What may have made this star special was an extremely rapid rotation”, Kasen said. “When it ultimately died, the collapsing core could have spun up a magnetar like a giant top. That enormous spin energy would then be unleashed in a magnetic fury”. Discovered as part of the SNLS, a five-year program based on observations at the Canada-France-Hawaii Telescope, the Very Large Telescope (VLT) and the Gemini and Keck telescopes to study thousands of supernovae, the two supernovae could not initially be properly identified nor could their exact locations be determined. It took subsequent observations of the faint host galaxy with the VLT in Chile for astronomers to determine the distance and energy of the explosions. Years of subsequent theoretical work were required to figure out how such an astounding energy could be produced. The supernovae are so far away that the ultraviolet (UV) light emitted in the explosion was stretched out by the expansion of the Universe until it was redshifted (increased in wavelength) into the part of the spectrum our eyes and telescopes on Earth can see. This explains why the astronomers were initially baffled by the observations; they had never seen a supernova so far into the UV before. This gave them a rare glimpse into the inner workings of these supernovae. Superluminous supernovae are so hot that the peak of their light output is in the UV part of the spectrum. But because UV light is blocked by the Earth’s atmosphere, it had never been fully observed before.

The supernovae exploded when the Universe was only 4 billion years old.

“This happened before the sun even existed”, Howell explained. “There was another star here that died and whose gas cloud formed the sun and Earth. Life evolved, the dinosaurs evolved and humans evolved and invented telescopes, which we were lucky to be pointing in the right place when the photons hit Earth after their 10-billion-year journey”. Such superluminous supernovae are rare, occurring perhaps once for every 10,000 normal supernovae. They seem to explode preferentially in more primitive galaxies, those with smaller quantities of elements heavier than hydrogen or helium, which were more common in the early Universe. “These are the dinosaurs of supernovae”, Howell said. “They are all but extinct today, but they were more common in the early Universe. Luckily we can use our telescopes to look back in time and study their fossil light. We hope to find many more of these kinds of supernovae with ongoing and future surveys”.

“It’s not just that the dust mass is low. We found that the dust mass is 100 times smaller than would be expected based on commonly assumed theories“, Fisher said. The galaxy, I Zw 18, is nearby, which makes it easier to study, but has properties that are very similar to galaxies of the high redshift Univese. “It’s an extreme galaxy in the local Universe, but it tells us a lot about a stage that almost all galaxies have gone through, so it gives us a picture of what the first galaxies look like“.

Fisher said the results imply that galaxies of the early Universe may have less dust than has been expected.

“This means, firstly, that they will look different than we expect and make different populations of stars than we expect. And secondly, that they will be much more difficult to observe, even with state-of-the-art facilities being built now such as the Atacama Large Millimeter/sub-millimeter Array (ALMA) of radio telescopes in northern Chile. IZw 18 is typical of very high redshift galaxies because it is very actively forming stars, and has a chemistry that is more like galaxies of the very early Universe with a very low abundance of metals and a lot of gas in the form of hydrogen“, he said. “Our result implies that current theories to describe the formation of stars when the Universe was very young are incomplete, and are built on invalid assumptions“. According to Fisher, the amount of dust is very important for the formation of stars. “What we think is going on, is that the harsh environment inside the galaxy we examined is adversely affecting the amount of dust in it. The radiation field measured inside I Zw 18 was roughly 200 times stronger than what we experience here in the Milky Way“. Fisher said that based on the findings, theories should be amended to account for environment in making stars.

The research is published in the most recent edition of the journal Nature. “It’s exciting to know we’re the first people in the world to see this“, said Vithal Tilvi, a Texas A&M postdoctoral research associate and co-author of the paper. “It raises interesting questions about the origins and the evolution of the Universe”. The paper’s lead author is Steven Finkelstein, an assistant professor at the University of Texas at Austin and 2011 Hubble Fellow who previously was a postdoctoral research associate at Texas A&M under the mentorship of Texas A&M astrophysicist Casey Papovich, who is second author as well as current mentor to Tilvi. Ten other international institutions collaborated on the effort, from California to Massachusetts and Italy to Israel. The galaxy, known by its catalog name z8_GND_5296, fascinated the researchers.

Whereas our home, the Milky Way, creates about one or two Sun-like stars every year or so, this newly discovered galaxy forms around 300 a year and was observed by the researchers as it was 13 billion years ago.